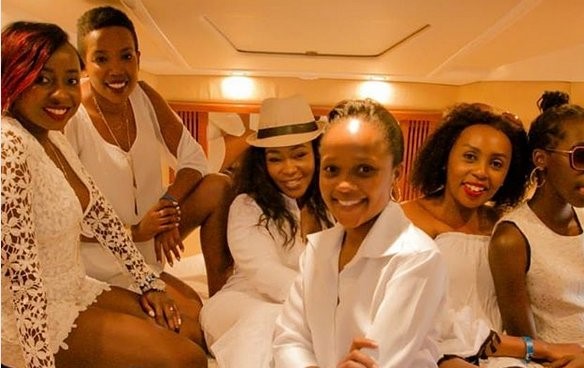 It was the Prussian statesman turned German Chancellor after his unification efforts Otto von Bismarck who remarked that “Only a fool learns from his own mistakes. The wise man learns from the mistakes of others.”

Former TV journalist turned vlogger Jacque Maribe sat down with Carole Mandi of True Love Magazine and gave a candid interview detailing the aftermath of her arrest which saw her once profusely rising career plummet like an abode of cards in an unfortunate sequence.

And while she addressed an array of issues from her relationship with her baby daddy, comedian Erick Omondi to her breakup with her erstwhile heartthrob Jowie Irungu, what piqued my attention was her revelation that her once admirable ‘girls squad’ that stirred envy, elicited awe and became a source of reference was nothing but a sandy castle that was washed into oblivion the moment the slightest whiff of tides and waves came ashore.

The cast of the short movie which should have been titled ‘fake wenches’ but which the gullible public saw as ‘friendship goals’ included Kirigo Ngarua, Terryanne Chebet, Monica Kiragu and Shix Kapienga. What a performance! Come on y’all, rise to your feet with an arousing applause for these young, sophisticated, beautiful women who aided and abetted by tour companies and through Instagram photos and Facebook posts gave us a stellar performance on what friendship is all about!

Well, that was until the fundamental glue that held them together was put under fire and it came melting like whip cream in the mouth of a stripper. The group’s demise is reflection of what most of these so-called ‘girls squad’ are; gossip and treachery motivated unholy matrimony of fake, pretentious vipers who are brought together by love of alcohol, glitz, show-off and moneyed men but who will not hesitate to turn into snitches or bolt out the moment trouble or misfortune beckons. They even discuss each other in the absence of those others- if you get what I mean.

These women scrammed like Usain Bolt the moment Maribe faced trouble when she and her then-fiancé Jowie were arrested over the murder of businesswoman Monica.

In her own words: “People I thought I was very close to. I even heard that some did public statements, disassociating themselves from me. People we were seen on holiday with. Being told we’re squad goals and things like that. I will be very honest with you, I have like two female friends to date who stood by me from the beginning,” Maribe told Mandi.

I know women are all about fixing each other’s crowns and hurdling up in herds like merino in the name of girl power; a mentality that had been exacerbated by my generation that grew up watching and listening to The Spice Girls, Destiny’s Child, Sex and the City, The Sisterhood and Waiting to Exhale- and thus are disposed into clamoring for a clique of female BFFs and that if you do not have a squad then you are a social misfit who needs therapy. But it is time someone poked holes into this kind of camaraderie.

For starters, not all squads are fake. If yours ain’t, good for you. But most are. You have a bunch of friends with vulgar, frivolous shared goals and a friendship bereft of purposes, ingenuity, decency, honesty or empathy. You have one who borrows clothes from the entire group but hardly returns them, one who is always asking for monetary bailout, the other who is in your man’s DM, another is always trying to show that she is better than the rest, another who hardly likes any of you – these BFF battalions are often a mess!

I began this piece by reminding us, especially the womenfolk that experience might be the best teacher but it is more advisable to learn from others’ experience. Understand from Maribe’s group who bolted on her during her tribulations that the idea of having a tightly knit group of ride-or-die girlfriends is a luxury for a few, and a myth for many.

Modern culture’s obsession with hashtag ‘GirlSquad, can make us feel left out and insecure as if there’s something wrong with us, but it should make us question the way we misconstrue how friendships work. You can have friends without having an entourage.

My anxious, paranoid, over-analyzing brain cannot understand the dynamic of squad friendships because friendships, like any relationship, takes effort and emotional investment, so it makes sense if it’s easier to cultivate rapports one-on-one rather than spreading yourself thin and trying to do five people in one. Doing so makes female group friendships a fad that are not sustainable. The notion of dedicating the same energy to each friend and receiving the same amount of attention from each of them is a pipe dream. Even if you do manage to gather a group of female friends, the reality rarely lives up to that idealized bond we see in films.

I guess what I have been trying to say in so many words is that true friendship is anchored mainly in four pillars: Acceptance- we choose friends based on mutual appreciation, despite sometimes differing in life views and values. In life, we are constantly feeling judged or held to certain standards and thus friends are those who take us for who we are with our flaws. This, however, does not imply that boundaries can be crossed or you let wrong things slide but it’s about being fluid but also honest.

Trust- Trusting someone else puts yourself in a vulnerable position. You open up, share secrets, feel safe, and relaxed. You have to wholeheartedly believe that they won’t hurt you. That is why a friendship has to be built on fundamental ideals- not just meeting for alcohol or by virtue of working for the same organization. It has to be more grounded than that.

And most significantly, Support- Aristotle says of friendship; “in poverty as well as in other misfortunes, people suppose that friends are their only refuge.”

A fair-weather friend disappears during the dark times (i.e. when we’re sick, going through a tough time at home or work) and reappears when the fog clears. Frankly, being let down by a friend hurts. Especially when you’re in a tough spot and in need of someone to talk to, or a shoulder to cry on. It’s important to remember that behaviour is how people feel about themselves – not you.

It is also paramount to know that to have a great friend, be one! And allow me to end on a cliché: quality over quantity

There should be a siren that becomes super loud if a woman lies about paternity of a child
TATU REGINALDAH November 25, 2020
©2020 Viusasa News. All rights reserved