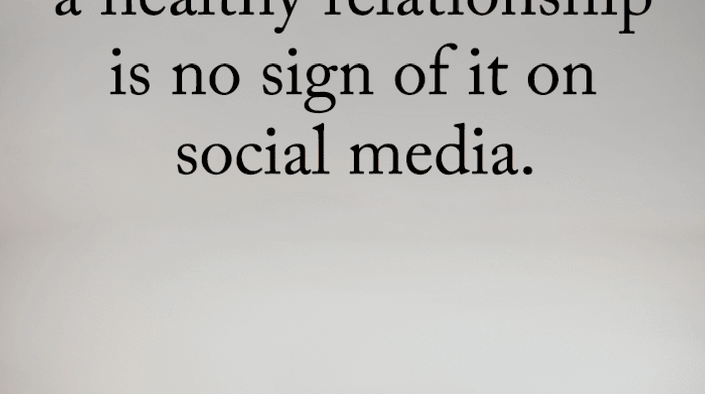 Nassim Nicholas Taleb, a Lebanese-American essayist, scholar, mathematical statistician has a very poignant quote attributed to him: “The difference between technology and slavery is that slaves are fully aware that they are not free.”

Yore are the days when relationships were sacred pacts where two people found solace, trust, and support in each other. Intimate camaraderie are no longer driven by a commitment to honour, love and respect each other; rather, for hashtags and gram. Privacy has been sacrificed at the altar of ‘goals.’

Social media has rapidly become a personal diary for many who feel the need to share even the nitty-grittiest of their lives with strangers; a virtual container for our emotions, memories, and experiences. While indeed social media is rapidly transforming into the primary communication source for this generation, one aspect that we should guard is that what goes on inside of our relationships should stay inside of our love lives.

I am addressing the gentlemen because they are not easily aroused to flaunt relationships online and so we are relying on them to return some sanity by henceforth refusing to allow themselves to be paraded like criminals having their mugshots in identification parade in the name of couple goals just to make some bunch of nitwits feel jealous.

The mark of a true relationship is that it does not rely on Facebook updates to keep it flourishing. Social media is a bit like Hollywood where every script has some happy ending. A sojourn on the newsfeed will leave you gapping at the love and happiness and commitment- kwa ground vitu ni different.

Listen guys, let the women who are emotional creatures do some of these juvenile things, you have no business posting your woman every week, it limits your hunting ground man, focus! Plus, I mean, if you stay in the same house with her, spend the night together and you still want to post an update that reads, ‘Just to wish the love of my life a meticulous day,” really?

If you do not stay together, pick the damn phone or send a WhatsApp. Kings, do not succumb to the pressure to join these weak herd turned online Alejandra. By Jove! social media is now fraught with men who have turned their timelines into digital confessional booths where they declare love like they have been served ultimatums, “post me or else!”

I have a feeling most of these love-struck blokes are under duress. Am I lying dudes? First, she goads you into replacing the photo of Thomas Sankara or your grandfather that you had on your ‘Avi” with the one you took together while on an excursion so that she can mark her territory. Imagine she is not even your wife yet.

Six months into dating, you have to post her at least twice a month- oh, ‘woman crush Wednesday, can your girlfriend even’ challenge, treat your woman September,’ before you know it, your timeline which had deep political and economic analysis is now nothing but an album of moments and bae’s photos surrendered to Facebook for public consumption.

Not to mention that you have to retweet and comment on every tweet or post from missus as a purvey of loyalty and forget her birthday at your own risk (guilty on the birthday part). By the way, your woman will post her photo and giggle as men compliment her but the moment a woman reacts with a love emoji on yours, you have to write a thesis to defend yourself.

Just update your background photo with that nice selfie you took at the office in your new suit and some random woman comments with a, “looking really handsome, George.” That is enough to start a US vs Iran confrontation.

Social media pages like Facebook, Instagram and Twitter are festering grounds for jealousy and insecurity. There is a bunch of reprobates just sitting in their homes, scrolling through social media and looking for a new project to work on. Guess what these projects are, ruining other people’s lives! That is their hobby.

They are full of hate and resentment towards others and they don’t even care about them. They think that if they can’t be happy, no one else should. They can’t wait to see someone being happy and finding a way to destroy it.

Seeing someone happy causes anger in their souls and they can’t wait to start gossiping around how the only reason your boyfriend buys you flowers is because he’s cheating on you.

Do not partake in the clique of people who no longer pick up on basic human communication clues. Haven’t you ever sat at a table with humans who instead of talking to and with each other, are chatting with strangers in Dubai!”

Remember, genuinely happy couples have nothing to prove! Feeding off the validation and approval of others is unhealthy and becoming intoxicated by the attention of others is dangerous for your relationship. The world is dehydrated, and being a spectator of your love affair temporarily quenches their thirst. Keeping your relationship private keeps your motivations pure. It ensures that every day you decide to move forward in your relationship you are doing so because of genuine reasons, not because you are addicted to the false approval of social media viewers.

And so I leave you with this quote by Catherine Price, author of, ‘How to Break Up with Your Phone.

“If you wanted to invent a device that could rewire our minds, if you wanted to create a society of pole who were perpetually addicted, isolated and overtired, if you wanted to weaken our memories and damage our capacity for focus and deep thought, if you wanted to reduce empathy, encourage self-absorption and redraw the lines of social etiquette, you’d likely end up with a smartphone.”

Previous Article
AOKO OTIENO: Knowledge on sports and stock market is great, but it’s the home-making skills that will keep him
Next Article
EDITORIAL: Maraga’s jab at parliament is a jab at the ‘unworried’ common mwananchi
trending_upTrending
whatshotPopular
Show More
Show More