Open letter to Millie Odhiambo: There’s more to politics than gyrating and heckling 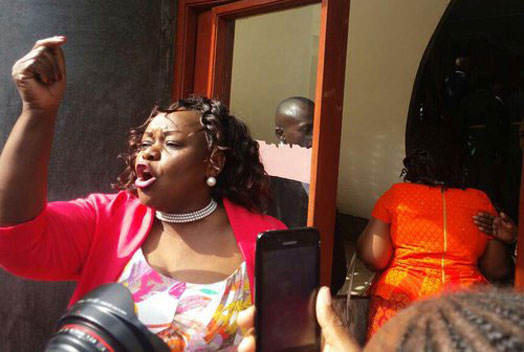 One of my most hallowed Thinkers and Writers, Ralph Waldo Emerson voiced a provoking take on criticism when he opined that “let me never fall into the vulgar mistake of dreaming that I am persecuted whenever I am contradicted.”

Today, I seek to contradict you and not persecute you with my words, dear Millie Odhiambo.

It is the hallmark of aporia, but one that behooves my pen to excoriate a woman I have grown to revere, adore and considered a paragon of what women leadership ought to be- Fiercely true to herself, eloquent, outspoken, cerebrally (just as you are physically) endowed and one who wears pluck and candor with ease like accessories.

During the supposed (re)launch of the Building Bridges Initiative at the Bomas, your voice rang like a clarion when Deputy President William Ruto was issuing his speech.

Even in the midst of the other uncultured barking coyotes, your bleating was conspicuous because you accentuated it by standing up- playing to the gallery. That women are aficionados of double speak is no brainer; and that politicians suffer from convenient amnesia is also an open secret.

Thence, allow me jolt your noggin to three years ago when you launched harangues and insults at the very same President something the man you accuse of disrespect has never done- At least not publicly.

To be pristine, I do not hold brief for the DP. My assertion is that him and President Uhuru Kenyatta are an incompetent and kakistocratic duo who are an affront to leadership and have ‘shitted’ on the responsibilities and sovereignty the majority bestowed on them on the ballot. So do not confuse me to be a disgruntled Tanga tanga minion trying to salvage the ego of her demigod cudgeled by the tantrums of a grown woman.

I have often held that women cannot swim in the muddied pool of politics with the same backstroke as men and expect to get ashore. Perhaps a lesson from fellow lawyer Kamala Harris will suffice.

During the debate between incumbent US Vice President Mike Pence and the VP hopeful Kamala Harris, Pence tried to interrupt Harris – just as Trump had done to Biden – but instead of losing her cool (Biden at one point did and said, ‘Will you shut up man?’ and at another, called the President a ‘clown’), Harris calmly told the VP that she hadn’t finished what she was saying: ‘Mr. Vice President, I’m speaking,’ she said at one point, before noting at another, ‘If you don’t mind letting me finish, we can then have a conversation — ok?’

Being erudite and emotionally intelligent, she used the greatest tool in her arsenal, a phrase that was both firm but polite: “Mr. Vice President, I am speaking.”

She defied stereotypes. She skirted around every trap Pence placed for her. She resisted anger and quieted her rage. Watching her eloquent handling of the situation made me so proud of being a young woman nursing the ambition of attaining the epoch of intellectual excellence. Her demeanor was the hallmark of what emancipation, education, confidence, self-belief and independent mindedness does to a woman.

In your defense when you were put on the moral pedestal over your remarks towards the President, you said: “If it was wrong for me to use the language I did on the president, then it is worse for him, because to those much is given much is expected. Given what the president is saying I have no regrets.”

To whom much is given. That is, it! Much is given to you as one of the few women leaders in this country who are not in the August House courtesy of Affirmative Action. You have gone against the grain to be elected in the chauvinistic Luo community as a woman MP twice despite being married in Zimbabwe.

In 2017, having sensed a hostile ground, you resorted to invoking the name of the President’s mother to win the ODM ticket. Loyalty is key in the party and what way to show it that screaming and blithering like a retard. An MCA only had to chain himself at a gate in Kisumu and the next thing, he is a National legislator courtesy of Chungwa. My community loves people who can “help Baba fight up there.”

I am inclined to believe that yesterday’s juvenile shebang was an attempt to find a political bearing and scavenge for a political lifeline as fog and mist continue to engulf your political life lately.

Women are leading liberation fronts worldwide. In New Zealand, Jacinda Arden won her second term bid with a landslide because she tackles issues with conviction, smarts, logic and hold conversations with maturity, knowledge and calmness.

The conversation on BBI is not bar charter. As one of the most astute women leaders we vaunt and would love to see on the gubernatorial and even presidential ballot, the onus is on you and co to lead the conversation with sobriety, honesty, firmness, intellect and depth it deserves.

If you disagree with the DP, something must set you apart with the ferried noisemakers who were simply earning their peanuts. Show your angst and dissent by countering his submission with logic, truth, facts and verve. You have many platforms you can use to disabuse those you feel he is misleading and call him to order without exhibiting such uncouth tendencies unfit for a woman of your age and status.

You are no longer the young, feisty lawyer who could get away with youthful exuberance and heckling. I have spotted wrinkles on you. Age is giving you its back. Honor it in the way you carry yourself. Be known for something more than gyrating to music and heckling at the slightest opportunity. This new cloak as a jingoist is clouding your traction as the cerebral politician and staunch women defender we have come to love.

You have the wherewithal to earn a very high place in Kenyan politics and the global stage. You have the head, the energy and the personality. Do not reduce yourself to a village mad woman roaming the political scene with obscenity

Many of us are looking up to you. Do better.

Previous Article
You only live once. Marry and remarry until you are satisfied
Next Article
Ladies, a man’s phone is like a masquerade, respect and fear it like you do your mama’s nudity
trending_upTrending
whatshotPopular
Show More
Show More

Ladies, a man’s phone is like a masquerade, respect and fear it like you do your mama’s nudity
AOKO OTIENO November 4, 2020
©2020 Viusasa News. All rights reserved