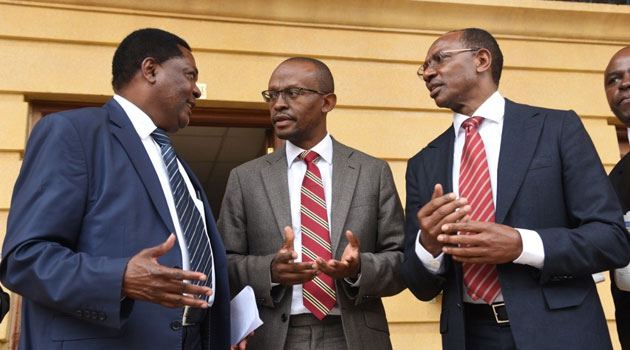 Billionaire Businessman Humphrey Kariuki and Africa Wines Limited Directors can finally sigh in relief after a Kiambu court annulled orders that had seen accounts belonging to several companies get frozen in a tax evasion row.

Africa Spirits Limited (ASL) filed a case Tuesday under a certificate of urgency seeking to lift orders issued by Kiambu Chief Magistrate on August 16 freezing accounts of nine companies with a large workforce.

In a ruling seen by Viusasa News,  Kiambu Senior Principal Magistrate Stella Atambo  determined that the orders that got the accounts frozen had already been rejected at the Milimani Lawcourts and were therefore unlawful.

“The applicant obtained these orders through forum shopping as on 9/8/2019 , a similar application before Milimani Chief Magistrate  had been made and declined,” the ruling reads in part.

The court heard that the DCI had sought similar orders at the Kiambu court without notifying the court about the outcome of the previous application.

Consequently, Magistrate Atambo explained that it was improper for the DCI to ride on orders that were neither sought nor granted.

In the same breath,  she noted that the orders to freeze the accounts were in conflict with the provisions of section 180 (1) of the Evidence Act which does not allow for the freezing of accounts but for accessing them for investigations only.

ASL through its lawyer had questioned how the prosecution was able to obtain orders which they had failed to do at a different court.

Besides unfreezing the bank accounts, lawyer Cecil Miller urged the court to suspend the hearing of the tax evasion case pending before Chief Magistrate Martha Mutuku at the Milimani Law Courts and another at the Thika Law Courts.

Mr Miller, who is appearing with Benjamin Musyoki for ASL, said the orders issued by the Kiambu court were illegal as the affected parties were not included in the case by the Director of Public Prosecutions Noordin Haji.