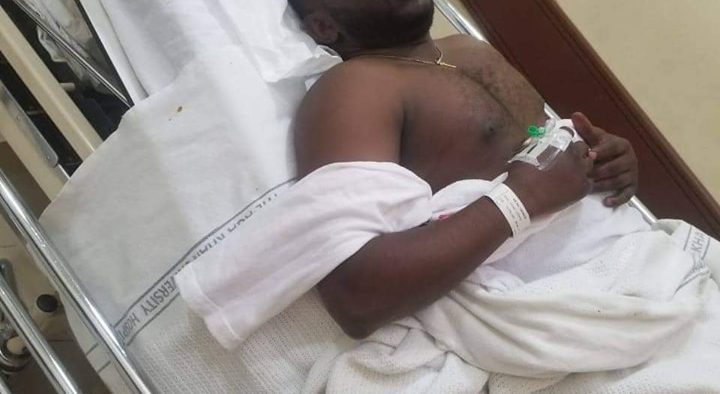 Governor Mike Sonko’s daughter Saumu Mbuvi and her alleged lover and Lamu Senator Anwar Loitiptip are nursing injuries after they were attacked at a popular club on Thika Road.

READ ALSO:Willy Paul, Nandy and other Tanzania musicians involved in a car accident

The love birds , a little birdie tells us, were having a drink while watching the UEFA Champions League finals at Memphis, a stone-throw away from the Safari Park Hotel.

Senator Anwar who is said to be Saumu Mbuvi’s new lover is nursing injuries after he was attacked after a night out at Memphis . Photo: Standardmedia

At some point in the night, Saumu who recently broke up with fiancee Robert Ouko excused herself to go take a leak.

She tells the police that while making her way to the ladies, she was accosted by a man who pulled her blouse and shoved her.

She screamed to save herself and in her words, someone hurled a stone at her before dashing into an adjacent room.

Senator Anwar who was aroused from his tipple-induced stupor and dashed to the ladies, just in time to save his woman.

The attacker crept from his hiding and pleaded for forgiveness and was let go.

The two then resumed their shenanigans and left the club at around 2.40 am on the said night.

While headed to the parking lot, a group of thugs led by the man who had attacked Saumu at the ladies descended on the senator, clobbering him with clubs on the head.

Saumu, in her statement, says that she jumped into the fray and covered the senator with her hands to save him from the beating.

He sustained deep cuts on the head from the attack but is in stable condition. Photo: Facebook/Anwar

As a result, she suffered injuries on her arms while her new lover sustained grievous cuts on the head and was rushed to the Agha Khan hospital where he is still admitted.

The latest comes just weeks after Saumu broke up with Robert Ouko- her husband and business partner.

Tabloids that claimed to have been let in on the nitty gritties of the nasty break up claim that Senator Anwar was at the heart of the matter.

Tags:
Previous Article
Eid unwrapped: Practices Muslims enjoy this season
Next Article
Meet the Governor with no chase car, CS who drives himself

Meet the Governor with no chase car, CS who drives himself
William Mwangi June 6, 2019
©2020 Viusasa News. All rights reserved