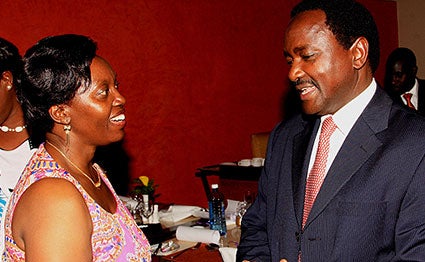 Former Vice President Kalonzo Musyoka and Kibaki-era Justice Minister Martha Karua are among the more than 20 lawyers selected for conferment of the rank of senior counsel.

The names will be forwarded to Chief Justice David Maraga who will then transmit the same to President Uhuru Kenyatta for gazetting. Once the names are gazetted, the 24 lawyers who have been selected by the Senior Counsel Committee will join the exclusive club of senior lawyers in the country.

Also on the list are Rautta Athiambo, who was recently inducted into the Law Society of Kenya (LSK) Roll of Honour, veteran lawyer Fred Ngatia, Wilfred Nderitu, who is remembered for having represented victims at the International Criminal Court (ICC) in the case against Deputy President William Ruto, Prof Albert Mumma, Pravin Bowry, the former Assistant Director (Legal Services) of the Kenya Anti-Corruption Commission (KACCA), and John Chigiti, among others.

LSK began sending out notification letters to successful applicants on September 19, after the Senior Counsel Committee completed vetting the 90 applicants who applied for consideration.

“The committee at its meeting held on August 26, 2019 considered your application. We are pleased to inform you that your application was successful,” part of the letter sent to the successful applicants reads.

The selection of the 24 means that 66 other applicants will have to bide their time for the next round of selection, whenever that might be.

Some of the big names who have missed out are LSK president Allen Gichuhi, former LSK president Eric Mutua, former East Africa Law Society president James Mwamu and Prof Ben Sihanya, among others. Mr Gichuhi’s omission had everything to do with his being a member of the selection committee.